This video, which I’ve just added to my page on stick and sword training, demonstrates a couple of the countless combinations that can be derived from the 4-Step Matrix for stick and sword, done both solo and with a partner. My partner, Dragan, and I begin with the attacking strikes/blocks entries, using reverse triangle and sidestep footwork, and close range covered exits (primarily to stay within range of the camera). We then demonstrate using the fake to draw entry with the same footwork.

Note: No one is going to stand with their stick out in the air, motionless, like you see in the application example in this video. The clip is included only to show the theory/purpose of the sequence and what COULD happen if your opponent was hit. In the future we’ll show examples in sparring.

The fake to draw entry begins with either a fake angle 1 or a fake angle 2 (in the video above), followed by a reverse swing that targets the opponent’s arm and head based on the way he attempted to block (ideally) the fake attack. One practitioner uses the fake entry, and the other imagines falling for the fake, and recovering to block the reverse shot.

You can learn more about the 4-Step Matrix on the stick and sword page.

The Palm Stick and Flashlight

The last post I wrote on the palm stick was about a year ago, when I explained why I didn’t like it as a self defense tool. After spending the last year experimenting, I’ve changed my mind. What I don’t like is the way most people I’ve seen use the palm stick, striking targets that have relatively little impact, using inefficient entries, flipping the stick around in their hands, etc. As I wrote in my new section on the palm stick, people shouldn’t be asking themselves how they can use a palm stick in a given position, but what the best technique for a given position is. That might involve using the palm stick, but it might not! The problem is when people get into the “everything looks like a nail” mindset because they’re carrying a hammer.

In addition to the main palm stick page I’ve added pages with a palm stick attack, palm stick defense, and another on the flashlight for self defense. I hope you find them useful!

Self Defense Weapons & The Parang

Humans have been using weapons since the beginning of their existence, and for good reason. Weapons provide a massive advantage in both attack and defense.  Every martial arts practitioner interested in self defense should learn how to use weapons both to better defend against their use, and to gain an advantage in a serious self defense situation. You can see how I categorize weapons and their use on my self defense weapons page.

Although people in most 1st world countries no longer carry swords, practicing with them (or a stick of a similar length) can provide very valuable lessons in self defense. The methods of attack and defense that work with a sword also work with a stick, cane, hammer, wrench, knife, machete…even a household iron. You can learn to use a “stick” or any other long blunt or sharp object through the curriculum and videos on my single stick page, which I plan to add to in the very near future. 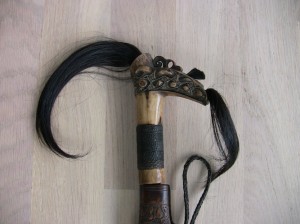 Aside from the usefulness of sword and stick training for self defense, swords from different cultures can be fascinating. I recently posted a review of the Filipino ginunting, one of my favorite swords for functionality, and thought I’d add a few pictures of another favorite, an Iban parang from the island of Borneo. I purchased this parang in the state of Sarawak on the Malaysian side of Borneo. It’s about 100 years old, and decorated with human hair. The handle and scabbard are the most beautiful of all the swords I own.

As beautiful as the parang is, it’s hard for a modern westerner to imagine they were used on head hunting raids.  Up until the late 1800’s or so, several tribes of Borneo required heads for all sorts of ceremonies, from those related to the rice harvest to weddings. Imagine having to cut a person’s head off before you could be married…or walking through the jungle where people were looking for heads! In any case, the parang is an amazing sword, very similar to others used in Indonesia and the Philippines.  It’s designed for one handed use, fast, well balanced, and the design of the handle prevents the parang from slipping out of your hand. 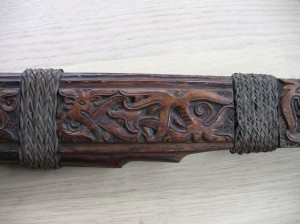 I’ve asked a few older Iban about their sword training, but never really gotten any detailed answers. They do have dances that involve the use of the sword and shield, but it seems that their “martial art” was lost when the practice of head hunting was abandoned.  If anyone reading this has information on the martial arts of the tribes of Borneo, I’d love to hear from you! I can’t imagine people like the Iban wouldn’t have had their own martial art. If you were living in a jungle at a time when nearby tribes wanted your head, wouldn’t you? 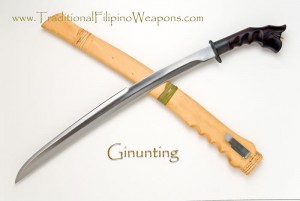 As a practitioner of Filipino Martial Arts, a great sword is a necessity. I’ve been meaning to post a review of a Ginunting I purchased a while back, and am finally getting to it now. I bought my Ginunting from Ron Kosakowski’s Traditional Filipino Weapons. I’ve bought plenty swords over the years, probably 20 or more.  I bought a samurai sword in Japan from the 1800’s, a Laotian soldiers sword in Laos from the early 1900’s, several Iban head hunting swords on the island of Borneo, a Filipino Pinute, etc., etc. Of all the swords I own, if I had to take one into a sword fight it would be my Ginunting from Ron’s store. (By the way, I do not know Ron and am not profiting in any way from writing this review…and of course I will hopefully never be in a sword fight!) Here is a comparison of the similarly priced Pinute from another company, and my Ginunting from TFW: 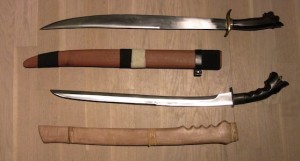 You probably can’t tell much of a difference from the above photo, other than noticing the cheap scabbard that comes with the Pinute (top).  But take a look at a close up of the blades…from the back: 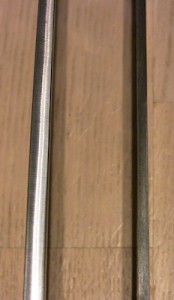 The Ginunting is on the left.  As you can probably see, the steel is twice as thick and a much higher quality on the Ginunting.  Here’s a close up of the scabbards and handles: 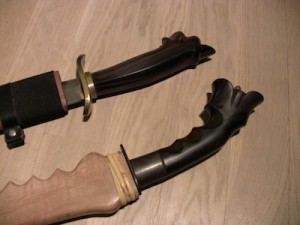 The handle on the Pinute isn’t all that bad, but the scabbard is such junk that it falls right out.  The Ginunting fits perfectly in the scabbard.  It’s snug, and definitely won’t fall out.  It handles like no other sword…amazing.  So if you’re looking for an excellent quality Filipino sword, order it from Traditional Filipino Weapons.  I’ll be ordering a couple more styles in the near future…

Want to learn how to use your swords with functional Filipino martial arts?  Click here for video and pictures.

I’ve been meaning to re-design and update the entire Hertao site, add more video, blog posts, etc., but have been too busy lately. I was asked on the Bullshido forum if I could find a version of sumbrada that was done at an “acceptable level”, and will post the results of that unfortunate search here. First I want to be clear that with the following videos I’m not suggesting that any of these guys can’t fight or defend themselves with a stick…only that the way they’re training sumbrada is not realistic. On to the videos:

The block with the checking hand that you see in seconds 6 through 8 will not work in reality. The only reason it works in the above video is because the “attacker” is holding his stick still in mid air. If this were reality, the “defender” would have his hand smashed by the stick as it followed through. The stick WILL follow through in reality, as you can see here. Only a cooperative partner will stop his stick in mid air so you can put your hand on his hand.

The same “defense” is done again at the 15 second mark. It doesn’t take much imagination to see that if the attacker really swung hard and followed through, the “defender” would have a really messed up hand and arm. The rest of the video is more of the same. Here’s another:

It’s hard to say which of these videos is worse…but I’ll go with the second. These guys are playing stick patty cake. They’re tapping their sticks with ZERO intent, stopping them in mid swing, putting their hands in places where they’d get nailed in reality, etc. Seriously, this is stick patty cake. The guys move into Pekiti’s “thrust on tapping” drill and also into hubud. All of it is done as if the target is in the middle of the air. Another:

This one looks a lot better on the surface, and to many people not familiar with real stick fighting, it’s impressive. The guys are moving all over the place, and going relatively fast. However, the footwork is not done with a purpose. It doesn’t help with evading, entering, etc. The “checking hand” positions will not work in reality. The only reason they work in this drill is because the practitioners are stopping their sticks in mid swing.

I should add here, there’s nothing wrong with stopping your attack in mid-swing in order to do a drill like sumbrada. The problem is when that action stops you from realizing your technique will not work otherwise. When we trained sombrada we often stopped our sticks in mid-swing also. The difference is that our checking hand position was either out of the way of the follow through, or would have stopped the swing itself. For anyone who hasn’t seen our sumbrada video, here it is again:

Notice the details. When the checking hand is used (in the case of the inside swing or #1 for example), it checks/stops at the wrist, not on the hand. Checking on the hand will not stop the swing. It will follow through and nail your hand.

I think this was the best video I found, but still not very good. In general these guys have “better” hand positions, and sometimes they’re even almost realistic. Take a look at second 2:18. This obviously will not work, and that’s the checking hand position used against the #1 swing in the majority of the video. The idea/position at second 2:23 is far better than at 2:18, but I seriously question whether the structure of that check/grab would hold up under a full power swing. The swing goes directly against the weak part of the grip.

So why are people training sombrada this way? I have no idea. But just because everyone is doing it doesn’t mean it works!

I’ve gotten numerous emails and comments on YouTube regarding our Sombrada video.  I’ve quickly added a new video to our website on the improper use of the checking hand, in hopes that it will clear things up.  If you’d like to discuss this, please do so in the comments below.

I’ve been meaning to post for months now, but haven’t had the time recently.  Last week I was able to film a couple of videos, one on Pekiti Tirsia Knife Tapping and another on wing chun trapping and boxing.  I’ve just put the PT video up, which you can access from the previous link, and in the next few days I’ll get another up on wing chun and boxing.  Let me know what you think.