I recently received an email asking what I think of the value of sensitivity drills and figured the topic would make a good blog post. This is somewhat controversial, as a number of traditional martial arts rely very heavily on such drills, and most sport and MMA fighters consider them to be completely ineffective.

What Are Sensitivity Drills?

For those of you who don’t know what sensitivity drills are, they are a little difficult to define.  I’m not certain about this, but I think the term may have come from Dan Inosanto or someone in the Jeet Kune Do Concepts area, where it was applied to drills like chi sao in Wing Chun, hubud in Kali, pushing hands in Tai Chi, and so on.  The drills tend to take place only at one particular range, and are designed to train reactions to different energy your partner “feeds” you.  The idea is that you become more sensitive to your partner’s energy or force, and learn to respond to it with techniques from the system you’re studying.  If you search YouTube for chi sao, hubud, or pushing hands, you’ll find many examples of such drills.

The term sensitivity drill is usually applied to drills that don’t closely resemble actual fighting.  Although a training drill that works particular counter punch responses to a jab, a cross, and a hook could also be viewed in terms of reacting to energy or techniques fed by your partner, I’ve never heard anyone call such training a sensitivity drill.  From my perspective, it’s possible that the term sensitivity drill was invented to give purpose to drills that are at least a step or two removed from actual fighting…they don’t teach you how to fight, but they increase your sensitivity or qualities that you can use in fighting.

First, I trained and taught such drills for many years.  At the time I felt they were beneficial.  I learned concepts from the drills, honed techniques, and eventually applied some of them in sparring.  So can a person learn something from sensitivity drills?  Certainly.  But the question I asked myself as both a practitioner and a teacher was, are sensitivity drills the most efficient and effective way to learn whatever is supposed to be taught through them?  The answer is no, at least with respect to the drills commonly grouped under that term, and the way they are practiced.  Furthermore, most sensitivity drills also ingrain bad habits.

In my experience, using sensitivity drills to train techniques and qualities is like using a screw driver as a hammer.  You can hammer a nail in with a screw driver, but a hammer would be a much better tool for the job.  The hammer would not only be a more effective tool, but it would also be a lot faster.

Think about what it is that you’re trying to train or improve with any given sensitivity drill.  Does it actually provide benefit in a real fight or self defense situation?  If it does, then think about how you can best train it.

Most if not all sensitivity drills I have seen, practiced, and taught, include techniques or combinations of techniques that would not work against a fully resisting uncooperative opponent.  Some of the drills have almost zero resemblance to actual fighting or self defense.  If your goal is to increase skills that can be used in a real self defense situation, then your training drills should mirror what actually happens in a self defense situation as closely as possible.

If you look at how people who fight for a living train, professional fighters, you’ll see that the techniques and drills they use correlate 100% to what they and their opponent’s do in the fight itself.  But let’s look at a sensitivity drill like chi sao in Wing Chun: 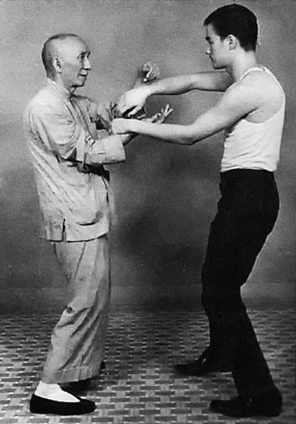 Does the above image look even remotely similar to what you might see in a fight?  Unless you’ve been brainwashed, you will have to admit that it does not.  This is exactly why Bruce Lee moved away from such drills and into western boxing.

Let’s take a look at two skills people try to increase through chi sao training: controlling and dominating the centerline, and trapping your opponent’s limbs to prevent his offensive and defense.  Both of these skills can be trained exactly as they would be used in self defense, in a scenario based context.  Both of these skills can be practiced in the context of sparring.

My goal in teaching is to provide students with the most efficient and effective path to functional skills.  Rather than learning to trap an opponent’s limbs through a drill that has no resemblance to actual fighting, why not learn to trap an opponent’s limbs in a drill or in training that exactly mirrors fighting?  I can’t think of a single good reason.  Of the two following images, which would be a more functional place to learn to trap your opponent’s arms?  Which would be more likely to lead to skills that you could actually use against an opponent? 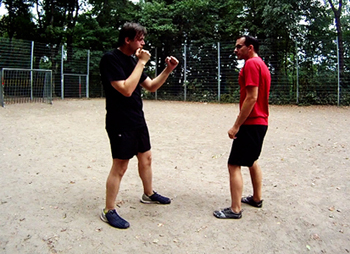 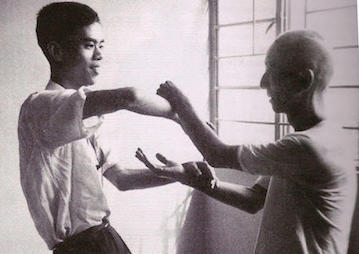 Both are contrived for the purpose of training, but one is more realistic than the other.  At this point in my teaching and training, I’m fairly certain that anything that can be learned from sensitivity drills can be learned more efficiently and effectively from training methods that more closely resemble actual fighting or self defense situations.  I can get a student to be able to use trapping much faster in the context of boxing than in the context of chi sao.

I’m not implying that techniques from Wing Chun, Kali, and Tai Chi can’t work in self defense.  I use and teach trapping that can be found in Wing Chun and Kali, and techniques that can be found in Tai Chi.  My book is full of them.  But many people don’t recognize them because the context is different from the context they are traditionally taught in.  The traditional context is in my view something that slows students down rather than speeds them up.  In the context of a stylized dojo I can understand how such training could evolve.  But just because many people do it doesn’t make it ideal.

What are your thoughts on this?  Can you think of a quality or skill that would be better to learn in a sensitivity drill than in a more functional/realistic training context?  If so, please let me know in the comments.