Deception In Self Defense

Deception is one of the most effective tactics you can use in self defense, and using it well will allow you to attack where your opponent is unprepared, all but guaranteeing your success.

Below is a quote from The Art of War, an outstanding book of strategy and tactics written in China by Sun Tzu more than 2,500 years ago:

All warfare is based on deception. Hence, when able to attack, we must seem unable; when using our forces, we must seem inactive; when we are near, we must make the enemy believe we are far away; when far away, we must make him believe we are near. Hold out baits to entice the enemy. Feign disorder, and crush him. If he is secure at all points, be prepared for him. If he is in superior strength, evade him. If your opponent is of choleric temper, seek to irritate him. Pretend to be weak, that he may grow arrogant. If he is taking his ease, give him no rest. If his forces are united, separate them. Attack him where he is unprepared, appear where you are not expected.

In MMA or fighting sports, deception can be used on a variety of levels.  You can “hold out baits” by leaving certain targets exposed, you can “seem unable” by faking a minor injury or stumble, you can “seem inactive” while actually waiting to ambush when your opponent attacks, you can fake high and hit low, and so on.  But in fighting sports your opponent knows you are there to fight, and he likely knows a good bit about you, your skills, and your fighting style.  In self defense on the other hand, particularly against an unknown assailant, there is no limit to the types of deception you can use.

Pretending to Be Weak

In a real self defense situation your opponent will have no idea if you will fight back.  In fact, in many cases your opponent will probably assume you will not fight back, otherwise he would have chosen an easier victim.  By “pretending to be weak”, acting as if you will not fight back, you can viciously attack your opponent when he does not expect it.  Adopting a fighting posture may help to dissuade an attacker in some situations.  If he believes you are more than he wants to deal with, it may work.  But if you’re pretty certain that you’ll have to fight, doing so when your opponent does not expect it is far superior to giving him cues that tell him to prepare himself.

Most martial arts and fighting sports teach practitioners to adopt a fighting stance in preparation for fighting.  And it’s somewhat natural to attempt to show your opponent that you’re prepared, to put on a show of toughness.  But think about the difference between these two scenarios:

Which option do you think would be more likely to succeed?

(Keep in mind that this is only a hypothetical situation.  I would never advocate fighting or physical self defense if there is anything you can do to avoid it.)

Around 1632 in Japan, a swordsman named Yahyu Menenori wrote a text he called The Life-Giving Sword.  In it he wrote about deception:

The truth is hidden within, a ruse is placed without, and in the end one is drawn onto the Path of Truth.  In this way, all deception becomes truth.

Every deception includes an element of surprise, when your opponent realizes that he has been tricked.  Anything you can do to bring your opponent’s attention to one place in order to attack a place where he is unprepared is a successful use of deception.  One great option is to throw something at your opponent’s face, any everyday object (coins, keys, a book, bag, etc.), and then nail him as he reacts to your move.  Everyone will react in some way to having something thrown at their face.  They’ll turn away, close their eyes, attempt to block it, catch it, or even just move their head out of the way.  This will create the opportunity for you to attack while your opponent is unprepared, to kick him as hard as you can in the balls, for example.

In addition to faking or using techniques to bring your opponent’s attention where you want it, using unexpected techniques is a form of deception:

When the vast majority of people think about fighting, they think about the classic techniques used in MMA, a combination of what is basically boxing/kick boxing/Thai boxing and wrestling.  I’ve trained in MMA gyms, and in my experience everything MMA fighters do is geared toward punching, kicking, and wrestling.  They don’t practice otherwise, and they don’t expect otherwise.

Although techniques like eye strikes and groin slaps aren’t magical moves that will allow you to beat anyone, as you still need to understand and be able to manipulate distance, position, timing, etc., they are extremely effective, and equally important, they are unexpected by the vast majority of average people and fighters alike. 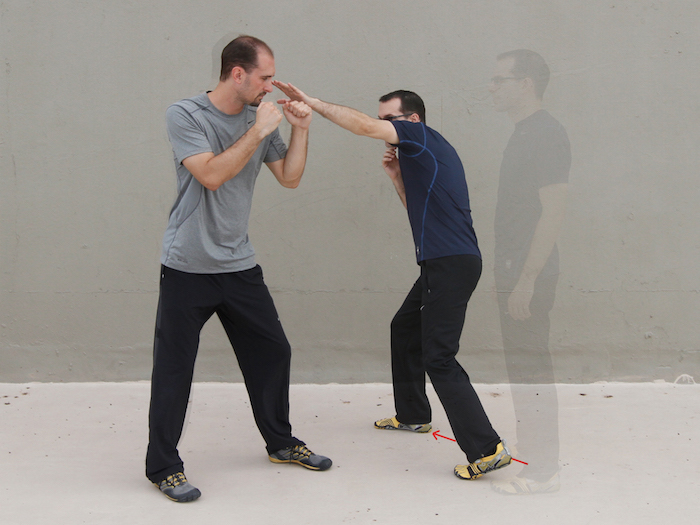 The triangular footwork that you can use with eye strikes and groin slaps is unexpected by most people, and when combined with the unexpected targets and the use of deception, they are excellent for self defense.

Whenever you think about potential self defense scenarios, or even fighting/sparring scenarios, consider how you can use deception to your advantage.  As Sun Tzu said, “All warfare is based on deception.”  If you’re not using it, you are seriously handicapping yourself.

Want to get FREE self defense material and tips?
Just enter your name and email below:
July 24, 2015| Categories: Strategy & Principles, Techniques, Weapons | 8 Comments »