How Fast Can You Learn Self Defense? 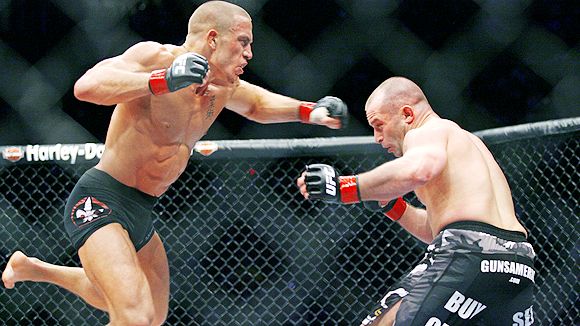 My last post, Advanced Class, was a response to a blog post by Rory Miller, where he wrote “everything that works can be taught to proficiency in 40 hours”.  I disagree, and I started to explain why in the last post.  I wrote the post too quickly.  I should have explained more, it could have been more comprehensive, and it was rather rambling.  I’m going to approach the discussion from another angle in this post:  How fast can you learn self defense?

There are at least two parts of that question that need to be clarified:

How fast can you learn to defend against what?  A cooperative training partner who isn’t really trying to injure or kill you?  A 40 year old man in average shape who attacks with a combination of punches?  A 20 year old guy who was a high school wrestler?  A 25 year old woman slashing at you with a knife?  A 35 year old gangster who has practiced boxing for years?  What if he has practiced MMA for years?  A gun threat?  How about multiple armed opponents?  What about a competitive MMA fighter?

Where I’m currently living, the MMA gyms are full of immigrants from relatively violent countries, and they’re responsible for the majority of the crime here.  They compete in MMA fights.  They often carry knives.  They train hard for several hours per week if not more, and they’ve been doing it for years.  Can you learn to physically defend against one of them in 40 hours? 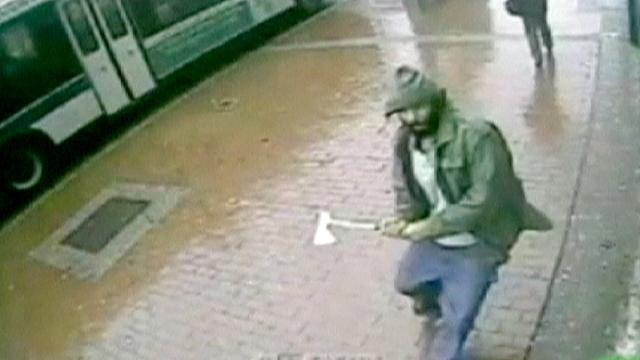 What if he has an axe?

MMA is not self defense.  But there are parallels in the sense that MMA involves striking and grappling, and unarmed self defense also involves striking and grappling.  Do you expect to be able to defend against someone with hundreds or even thousands of hours of MMA training with only 40 hours of training yourself?  Will you be using a weapon?  What if he has a weapon?  What if there are three guys like him?

What is your current state of fitness?  Physical self defense is often like an all out sprint.  Not always, but often.  Are you in good enough shape to handle that?  Are you a small woman with very little strength?  Are you an older person with a disability?  What are your existing skills?  Do you know how to make a fist, where to hit with your palm, or how to do an elbow strike?  Do you have experience with stand up or ground grappling?

I’ve taught a great variety of people all over the spectrum.  I once taught a 70 year old man with no formal training who was a building contractor.  He often got into fights, and he was tough as nails.  He would have easily beaten the majority of people who first walked in my door.  I’ve also taught men and women who had absolutely no idea how to make a fist.  They had no clue how to throw an elbow strike, and even after multiple classes/hours they continued to attempt uncoordinated strikes with the wrong parts of their bodies.  I’ve taught people who learned incredibly fast, much faster than I ever did.  And I’ve taught people who learned very slowly.

So how fast can you learn self defense?  The question is meaningless without a lot of context.

In  my view, self defense includes footwork, kicking, hand strikes, elbows, knees, and headbutts, and defense against them.  It includes stand up and ground grappling, which involves positional dominance and escapes, joint manipulations and chokes from the various positions (standing high tie up variations, standing low tie up variations, the mount, the guard, side mount, knee in stomach, north-south, etc.).  It involves the use of and defense against long blunt and short blunt objects, long sharp and short sharp objects, linked objects, and projectiles.

In a comment on Rory’s original blog post a guy named Jim responded to one of  my comments about this and said:

Well, let’s look at striking quickly. What do you have to do? Impact the weapon against the desired target. The power generation principles run the same, whether we’re looking at a palm, a clenched fist punch, an elbow, or baton. If taught in a principle based manner, all you have to do is change the striking implement. So, instead of an hour block on palms, an hour block on punches, an hour on elbows (OK, figure that’s really on 2+ block of “striking”) coupled with another couple of hours on “baton striking” — we have an hour or two on “power generation & impact weapons.”

This sounds great.  But there’s a serious problem with the reasoning:  The neurological connections that are required to use your hand effectively are different from those required to use your elbow effectively.  You can write using one of your hands, but probably very poorly with the other.  Try attaching a pen to your elbow and see how well you can write with it.  As I wrote previously, I’ve taught people who have had a hard time just learning how to punch or palm without hurting their hand, and who would revert back to ineffective striking repeatedly, for weeks.  “Hard wiring” the connections in your brain takes time.

Someone who can already strike with any part of their body understands that the principle is the same no matter what they’re striking with.  And to them it may seem like this is simple.  But for many people it isn’t a simple matter, even if they get it intellectually.  For some people with very little strength, even if they do strike correctly it will have very little impact unless they have the accuracy to strike someone in the eye, throat, or groin.  And, what happens when their opponent is a guy with 5 years of MMA experience and fighting, who counters that first defensive strike?

Striking should almost always be accompanied by footwork.  Let’s look at a very simple footwork example, a forward step and slide: 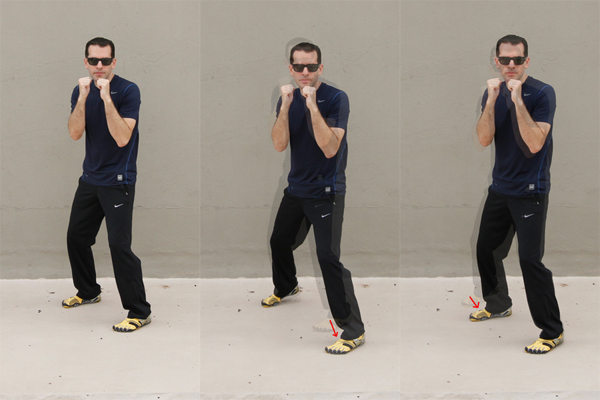 It looks extremely simple.  And it is.  You step forward a bit with your lead leg, and then your bring your back foot up.  As simple as this is, I don’t know that I’ve ever taught a beginner who could do it in the first few hours, under pressure…forward and/or backward.  Everyone naturally has the tendency to either leave the rear foot back and lean forward, destroying their balance and ability to continue, or to bring the rear foot too far forward, right up to the front foot, also destroying their balance.  The same is true in reverse and side to side, and it’s one reason why so many people fall down when they get attacked.

In our everyday life we often lean forward or backward.  We often bring our feet together or cross our feet.  It takes time to rewire our brains and learn not to do these things in a self defense situation.  And it takes even more time to be able to hard wire these things in, so that the mistakes don’t come out under pressure.  Even after many months of training a student, I still found myself correcting them on these very simple movements.

Anyone can intellectually learn the common denominators of striking and grappling, the core concepts.  But it takes many years of training to be able to effectively fight or defend against someone who also has many years of mixed martial arts experience, for example.  What if your opponent has trained? 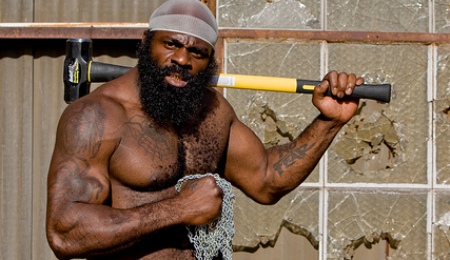 What if he also has a sledge hammer?

Techniques are only one small part of self defense skill.  Knowing how to throw a palm strike or do an elbow break is one thing.  Being able to do it against someone who is throwing a punch at your face is another thing entirely.  Being able to do it after someone has already hit you in the face is yet another thing.  To use techniques requires an understanding of and an ability to manipulate distance, position, and timing.  These qualities are anything but natural, and they take time to develop.

Consider the difference between someone who has been boxing for 6 months and someone who has been boxing for 10 years, or a beginning boxer and an expert boxer.  Boxing has very few techniques.  The difference is primarily in their ability to manipulate distance, position, and timing.  For months of training, a beginning boxer will attempt to hit an advanced opponent when he is out of range.  And the beginning boxer will get hit because he’s too close but doesn’t realize it.  He’ll get hit because he poorly times an attack or a defense.  Because the distance, positional understanding, and timing of fighting are not natural to those without a great deal of experience with fighting, they take substantial time to build.

Today I saw a young man with no previous training handle a simultaneous full speed attack from three people. That was with ten hours of training. Two more hours and he was putting things together.

How many people at that seminar saw the same thing, and believed that this young man with no previous training really learned how to defend against a full speed attack from three people?  I wouldn’t be surprised if all of them did.  But think about this for a moment.  If one person at the seminar learned to defend against three people, how is it that those three were “beaten” by only one?  The answer is obvious.  The three attackers were not really attacking.  Or at a minimum, they were not continuing their attack.  In the context of a seminar, where “attackers” either aren’t really attacking, or are attacking in seriously limited ways, it’s easy to believe you’re learning more than you are.  What you can do in a cooperative and limited martial arts class is very different from what you will be able to do in reality.

What Can You Learn In A Short Period? 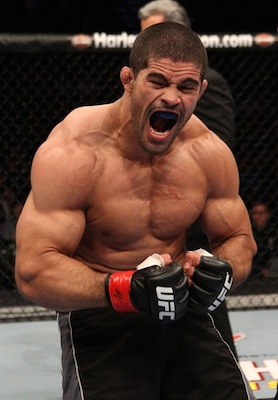 Well, you probably won’t learn how to physically defend against a surprise attack by the guy in the picture to the right.  But there is a lot you can learn.  You can learn how to be aware of your surroundings and how to prevent an attack from occurring in the first place.

In terms of physical self defense, I do make things as simple as possible.  Everything you need to do can be thought of as following one simple concept: the Covered Blast.  It doesn’t matter if you’re up against a single unarmed opponent or multiple armed opponents.  The concept works just the same.

If you learn what I call the Fundamental Five and the Four Step Matrix, you’ll have a combination of extremely solid, efficient, and effective techniques that follow the Covered Blast concept.  I’ve taught the Fundamental Five to more than one person who has successfully used one of the techniques in self defense with less than 5 hours of training.  But that doesn’t mean they’ve become proficient at self defense in less than 5 hours!  It simply means they were lucky enough to have been attacked by someone where one of the techniques was the right solution even with minimal training.  If the fellow at right would have surprise attacked them with a hammer, I seriously doubt they would have done so well.

In addition to techniques you need solid training methods, a substantial investment of time, and a lot of hard work.  Learning how to use weapons, particularly something as simple as pepper spray, can go a long way.

No absolute beginner is going to be able to train 40 hours and defend against an experienced opponent, multiple opponents, or armed opponents without a serious dose of luck.  Depending on the qualities you bring to the table, you may be able to learn a lot relatively quickly.  But learning self defense is a process that never ends.  There is always more to learn.  You cannot learn it all in 40 hours, 40 weeks, or even 40 months.