I’ve recently added the video above to my knife page, covering common knife vs. knife techniques and training drills, why many of them won’t work in reality, and functional unarmed defense against knife attacks.  In addition to the specific techniques and training methods shown in the video, it demonstrates a number of important concepts that can and should be taken into account in all self defense training.

Why Most Knife Training Doesn’t Work

Common knife training isn’t unique in that it doesn’t apply well in reality.  Most martial arts don’t work in self defense.  So it shouldn’t be surprising that styles that focus on or include weapons training are any different.  In fact, the inclusion of weapons often makes systems worse, since it’s even harder to train realistically with deadly weapons.  When you can’t slash or stab your partner with a real knife, for example, it’s easy to make something up that may sound good, but turn out to be inaccurate.  The inability to train with live weapons also causes people to do things they’d never actually do if the weapons were real.  Those issues combined with the usual ineffective training due to low levels of resistance, cooperative training partners, and martial arts group-think, are particularly problematic.

Many people are taught and/or assume that getting slashed or stabbed with a knife will stop an opponent immediately.  It rarely will.  I’ve known a few people who were stabbed, and read about many more, who didn’t even realize they were stabbed until after the encounter was over.  I was with a guy once who was shot next to me.  We ran a couple of blocks and then stopped for a moment, before he realize there was a hole blown straight through his hand.

Lots of knife training drills, from long range sparring to “defang the snake” patterns, are based on the opponent being immediately disabled with a single unattached technique.  Aside from this unlikely possibility, what if you miss?  What if your opponent is wearing thick clothing?  If you’re going knife vs. knife and you either miss or your opponent isn’t instantly disabled, what position will you be in?  Will your failed action be an opportunity for your opponent?  In many common knife drills, it will.  Underestimating the extreme chaos and pressure of a real knife attack can be a serious, deadly mistake.

When your training partner is cooperating with you, even if he is resisting (there is an important difference between resisting and being uncooperative), anything can work.  Because most training isn’t taken to an uncooperative level, countless fantasy techniques and disarms have arisen.  I’ve watched highly regarded instructors do completely unrealistic disarms one after another, as their cooperative partner pulls 10+ knives off his belt and gets repeatedly and instantly disarmed with each attack.

On my self defense training page, I mention the I Method for realistic training.  After a practitioner is introduced to a technique, which should only take a few minutes, he should then move to the isolation phase, where the technique is drilled with progressive resistance.  Eventually, in the integration phase, the technique should be trained against an uncooperative partner.  In armed and unarmed training, it’s extremely important that the practitioner progresses to the level where he tells his partner, “don’t let me do this”.

All of the fantasy knife techniques and crazy disarms would cease to exist if the attacker was told and honestly followed that one simple phrase: Don’t let me do this.

How to Get Control 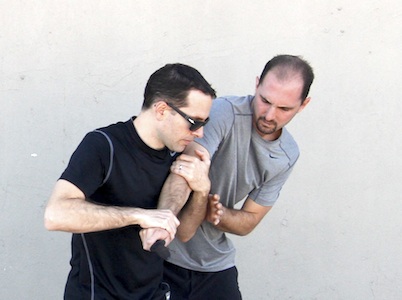 In knife defense, the primary goal is not to get cut.  The only way to avoid getting cut is to control your opponent.  You can control your opponent via striking/slashing/stabbing/blocking…through unattached methods.  But if you haven’t taken your opponent out, it will be a continuous battle in chaos, and the longer it goes on, the more likely it becomes that you’ll get cut.  One of the quickest and simplest ways to get full control of your opponent’s knife bearing limb, is to grab his arm with two hands (as demonstrated in the video at the top of this post).  Once you’ve got control of the knife, there are a great variety of ways to take out and/or disarm the attacker, that work under full, uncooperative resistance.

It’s counterintuitive that unarmed knife defense can be safer than using a knife of your own, but putting something in your hand can limit the use of your hand as much as it can help, and when you need as much control as you can get, the limitations can outweigh the benefits.

Give your partner a fake knife, tell him not to let you make your defense work, to slash and stab you like his life depends on it.  Try getting the two-handed control, and I’m fairly certain you’ll find it works better than the vast majority of close range alternatives.