The Problem With Wing Chun (and every other martial art)

Wing chun has one of the same problems that every martial art has.  And if you’re only studying wing chun, or any other art, then this problem could cause you to be seriously hurt in a real self defense situation or fight.  (I’m using wing chun as an example because I receive more questions about it than any other system.)

What It Is, and What It Isn’t

Wing chun has a specific style.  It utilizes specific techniques, training methods, and concepts.  Anyone with just a little knowledge of various martial arts would never confuse a wing chun practitioner’s movements with those of karate, tae kwan do, or boxing.  Each of those styles, and many more, is specific and easily identifiable.

This is a serious problem.

There was a story on NPR about a year ago that discussed studies demonstrating how professional baseball players did very poorly when attempting to hit a ball thrown by women using an underhand pitch.  Although professional players can hit balls thrown at extremely high speeds, they become accustomed to exactly how the ball is thrown.  And when it’s thrown just a bit differently, they can no longer hit it.  Surprising as it may sound, their ability to hit an underhanded pitch is no greater than that of the average person.  Their specific skill is not transferable to another pitching style.

In addition to the stylistic elements of the techniques included in a system, there is the larger problem of techniques that are not included in a given system.  Wing chun is primarily a close range system.  The majority of training does not take place in the range that tae kwan do, judo, or Brazilian jiu jitsu takes place in.  Practitioners do not learn to defend against techniques from tae kwan do, judo, or BJJ, because they don’t know how to do them in the first place.  And, you cannot learn to defend against something that you cannot do well yourself.

Bruce Lee used the phrase “a fancy mess” to describe what many traditional martial arts have become.  It’s an accurate description.  People who practice a single style like wing chun not only practice techniques in a certain stylized (unnatural) fashion and leave out techniques that are not part of their chosen style, but they also develop a fancy mess as a result.  One practitioner uses a wing chun attack, another uses a wing chun defense, and the initial attacker develops a wing chun counter to the wing chun defense.  Evolution happens, and you end up with a fancy collection or series of offensive and defensive techniques and training methods that look nothing whatsoever like an actual attack on the street!

There is a common training drill in wing chun called chi sao, which is a great example of this.  Take a look at the following picture: 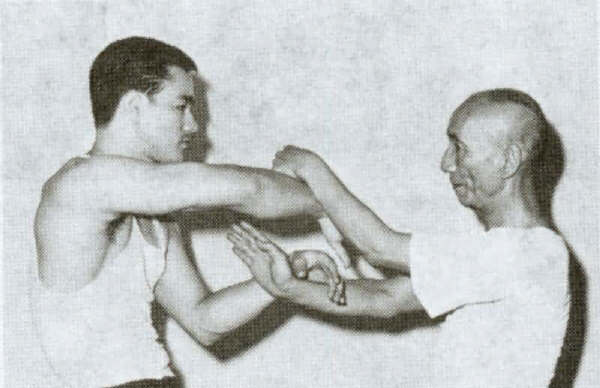 Have you ever seen anyone fight like this???  Of course not.

Now, I understand that chi sao is not a fight.  I understand it’s a drill designed to train wing chun techniques, skills, and strategies.  I practiced and taught it myself for many years.  So I know first hand that although there are some valuable techniques and concepts in the exercise, there are also a host of problems with it.  It has largely become what Bruce Lee declared, a fancy mess.  It bears very little resemblance to a real fight or self defense situation.  There are better ways to train the effective techniques and principles used in wing chun.  But it’s natural that in a school that is limited to a particular style, a fancy mess of techniques and training methods will evolve.

No single style is sufficient for self defense, because by definition every style has particular stylized movement, excludes what is not a part of the style, and over time evolves to become a fancy mess.  But, many styles do have valuable techniques, training methods, and strategies.

The key is to do exactly what Bruce Lee, arguably the most famous wing chun practitioner ever, said: “Take what is useful, and discard what it useless.”  Unfortunately the system he created, jeet kune do, which was supposed to be a system with no system, has become as much of a stylized fancy mess as any other style.

It is for this reason that I call what I teach “functional self defense”.  It is not a system or a style.  It is simply a collection of the most efficient and effective techniques, training methods, and strategies from wherever they may come.  Some of them come from wing chun.  Some come from boxing.  And so on.

The key is to avoid practicing or creating a structured, limited style.  Learn to use and defend against the most common attacks.  This is what I call the “MMA Base”…boxing, kickboxing, and wrestling…the most natural and common techniques of fighting.  Add modern weapons to the mix.  Add the most efficient and effective techniques, training methods, and strategies.

It’s ok to study wing chun or any other specific martial art.  But if you want to learn how to defend yourself, it’s not ok to limit yourself to any particular style or teacher.  Keep an open mind.  Explore different things.  It’s the only way you’ll avoid limitations and fancy messes.