The Value of Weapon Use 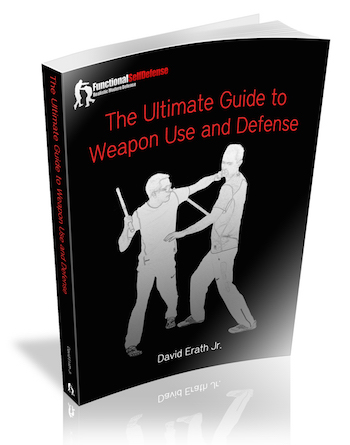 The Ultimate Guide to Weapon Use and Defense

I regularly get emails from people who tell me they are older and/or have health problems and injuries, asking me what I would recommend in terms of self defense practice.  About a year ago I wrote a post to address this.  My recommendation in that post was to focus on two things: prevention and weapon use.  Prevention will work nearly 100% of the time for the vast majority of people reading this.  But if it doesn’t, then weapon use is the next best thing.  If you’re smaller, weaker, slower or otherwise less skilled than your attacker, having a weapon that you know how to use can allow you to easily disable your attacker.  (Pepper spray is probably the best option for many people.)

My first book, The Ultimate Guide to Unarmed Self Defense, covers unarmed defense against unarmed attacks.  It does not cover defense against armed attacks or the use of weapons in self defense.  I do have a great deal of information on using and defending against weapons here on my website, but a website isn’t necessarily the best or easiest medium to learn from.

I haven’t posted in a while, because I’m spending most of my time working on my second book, which will probably be titled The Ultimate Guide to Weapon Use and Defense.  I’m hoping to have it finished in the next 3-4 months.  The book will cover unarmed defense against armed attacks (stick, knife, and gun), but also how to use blunt, sharp, and projectile weapons in self defense.  If you’re subscribed to my site, I’ll let you know when the book is finished.

Update: I’ve just added a new page to my website with part of a series of instructional pictures I had taken for the book on the use of double sticks.  Double stick training is not necessary for self defense.  It’s not something I spend time training anymore, but the training can be fun, it’s great for coordination, and many people enjoy it.