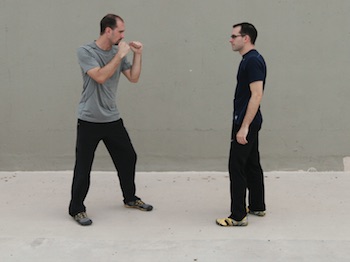 Last week I practiced for the first time with a friend of mine named Paul.  He practiced karate and aikido for a number of years, is a very athletic guy, and is also a physical therapist.  We followed the progression I nearly always do.  In the first hour and a half or so we started with the boxing and Thai boxing portions of the MMA Base, trading jabs, crosses, hooks, and Thai kicks along with various defensive techniques.  Then we added triangular footwork and went over the first of the Fundamental Five…the eye strike and groin slap with a hit and run strategy.  At the end of about 2 hours Paul was doing very well with all of the above, and combining the techniques into an offensive and counter-offensive blast.

As we were finishing up with practice Paul told me he learned more in 2 hours than he had in years of previous practice.  In terms of truly functional techniques and applications that may be true.  For a moment I thought…man, maybe a person can learn everything necessary for self defense in a relatively short period of time.

But here’s the deal…there is a huge difference between these three scenarios:

The first scenario only occurs in training, and in some martial arts/self defense schools this is the only kind of scenario that is practiced.  The second scenario is substantially more difficult.  Knowing that your opponent is going to throw a straight right punch and that you are going to use a specific counter is easy as pie.  When your opponent can attack you with anything…a punch or punches, a kick or kicks, a combination of punches and kicks, a tackle, etc…it makes defending much, much more challenging.  (Using high percentage default responses and interceptions, as we do with the Fundamental Five, lessens the difficulty.)  Any school that has practitioners spar is using the second scenario, so it’s not all that uncommon, but many traditional martial arts schools neglect to do it.

The third scenario however is rare in the vast majority of martial art and self defense schools, despite the fact that it is the most common self defense scenario.  It is also by far the most difficult situation to find yourself in.  In Chapter 8 of my book, Environmental Applications, I explain the challenges of this scenario along with solutions, but it occurred to me that I’ve written little about it on my website.  The problem with the third scenario, in addition to not knowing if your opponent will attack or what he will attack with, is that you’ll likely be distracted by other environmental factors.  The potential threat may be talking to you, asking you a question, or occupying you with some relatively normal physical gesture (a handshake for example).  Responding to a surprise attack while your brain is focused on answering a question or responding to a physical gesture adds a considerable level of complexity to the attack.

Try reading a book and talking to someone at the same time.  You can’t do it.  Your brain can only really focus on one thing at a time.  So when an attacker causes you to focus on something by talking to you or making a physical gesture that requires a response on your part, and then attacks you…it is very, very different compared to the first and second scenarios.  At a minimum you’ll be uncertain as to if the attack will come and what it will be.  If a distraction is used, purposefully or not, your mind will also likely be preoccupied and unable to consciously respond in time to stop the attack.

Learning how to use a specific technique against another specific technique, what you’re doing with the first scenario, is absolutely essential.  It’s not bad training, but it’s not complete training either.  It’s like learning to drive in a parked car.  You need to learn where the gas pedal and brake are before the car starts moving, but you also need a lot more than that.  It would be wrong to sit in a parked car and press on the gas and brake pedals and think…wow…driving is easy!

Learning how to use techniques against random attacks, what you’re doing in the second scenario, is also essential.  But in that scenario there is no real uncertainty as to if there will be an attack.  There is no uncertainty as to what you’re going to need to do tactically in response.  The only thing you need to focus on is physically responding.  It’s really not that difficult to learn to spar at a decent level of intensity.  So it’s easy to understand why people who only train using the first two scenarios might feel like self defense is easy and quick to learn.  When there is little uncertainty and one simple point of focus…of course it is!

What makes self defense so difficult is the uncertainty and the distractions.  In order to respond effectively and unconsciously, which is the only way you can respond fast enough to a surprise attack, particularly if you were being distracted, is to train long and hard enough to ingrain the material in your subconscious.  Add a fully resisting and uncooperative opponent or two to the mix, and you’ve got a serious problem on your hands!

I talked to Paul about this when we finished practicing, and he told me that as a physical therapist he uses conversation and questions to make exercises for his patients more difficult.  He explained that once they learn to do a certain exercise, asking them a question or talking to them totally throws them off.  It shows him how well they have internalized the movement.

In your own training, you need to have your partner approach you and ask you a question or make a physical gesture that requires you to respond.  Sometimes your partner will attack you.  But sometimes he won’t.  He may ask you three or four questions, and you have to respond to them all.  You’ll have no idea if he will attack or how he will attack.  If you haven’t tried such scenario training before, it will be eye opening.  You’ll have a new appreciation for how difficult real self defense situations are, and how much training is actually required to respond successfully.

I may have mentioned it before, but I used to have a simple rule of thumb I gave my students:  “Maintain a safe distance.  If you feel threatened and cannot escape, attack.”  If you’re able to maintain a safe distance from potential threats, it will be easier to identify a threat before it becomes an assault.  If you attempt to maintain a safe distance and the threat doesn’t allow you to, then you have a problem.  No well-intentioned individual is going to invade your space when you physically and verbally tell him not to.  If you feel threatened, attempt to escape, and cannot, then you have a person who has already begun his attack.  I won’t elaborate here on legal self defense, what you can do, and when you can do it, but this page might help in that regard.

In any case, it’s important to realize that real self defense often involves a great deal of uncertainty and distraction.  It would be nice if self defense was as easy as one person throwing a straight right and another person stepping aside and kicking him in the groin.  But there is a great deal that comes both before and after the first technique, and these things require functional strategy and training to wade through.