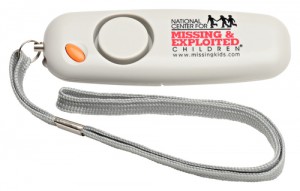 I was not paid to do this post.  And I don’t ever review or recommend products that I haven’t tried myself and found to be functional/effective.  With that out of the way, Vigilant PPS (Personal Protection Systems) contacted me and asked if they could send me one of their personal alarms to test and review.  I’ve never bought, owned, or even seen a personal alarm before, and hadn’t thought much about them, but I found the idea interesting, and agreed to give one a try.  Here’s a link to the unit they sent me, on their website (also pictured at right).  This particular unit is a special addition in partnership with the National Center for Missing and Exploited Children, where Vigilant donates $1 to the center for each unit sold.

I tried making a video for this review, but my laptop automatically and drastically decreased the volume when the alarm sounded, making it seem less effective than it is, so I decided only to post about it instead.  In the picture above, the same image displayed on Vigilant’s site, the unit may look slightly smaller than it is.  Here are a couple of pictures so you can accurately see the size of the unit:

Although it’s slightly wider than my hand, it’s very light, thin, and would easily fit in a pant pocket.  The round “circle” is the “speaker”, and not a button.  And the orange button is used to activate an LED light that sticks out right below where the lanyard attaches to the device.  To make the alarm go off, you simply pull the lanyard off of the device, or pull the device off of the lanyard.  I think this is a smart design, as it would be easier to use under stress than having to find and press a button, and keep it pressed.  To silence the alarm you have to put the “pin”/lanyard back into the device.

The alarm is VERY loud, and it’s surprising that such a small device can produce such a loud sound.  It’s actually painful to my ears, and extremely annoying.  I have no doubt that the alarm would surprise an attacker, particularly indoors.  Although the alarm is extremely loud, it doesn’t travel well through walls or closed doors, so I wouldn’t rely on it to alert someone who is a wall/door or two away from you.  They may hear it, but I would assume that many people would just wonder what the noise was.  I’m also not sure you’d get much attention from people indoors if you used it outdoors, especially considering how many car alarms go off accidentally, and how few people pay attention to them.  However, an attacker isn’t going to know that.  He/she is just going to hear an extremely loud alarm go off.  If the attacker doesn’t want attention drawn to the scene, the use of this alarm could definitely cause him or her to flee.

It Doesn’t Replace Awareness and Prevention

No weapon replaces the need to be aware and to do what you can to prevent an attack before it occurs, and the owners of Vigilant said the same in an email to me.  In order to use this device you need to have it or the lanyard in your hand, or very quickly accessible, and you need to see the threat coming.  Again, that’s true not only for this personal alarm, but also for a gun, knife, pepper spray, etc.

When to Use It

I just received this alarm and have never used one before, so my thoughts on this are relatively fresh.  If anyone disagrees with me here, please let me know/discuss in the comments.

My thinking is that this alarm would not be ideally suited for a robbery, where an attacker threatens you with a weapon and demands your money, purse, etc.  Such robberies tend to be quick, the attacker can still grab what he wants, and I wouldn’t risk angering an attacker with an alarm in such a situation, particularly since the alarm isn’t going to do anything to stop the attacker from stabbing/shooting/assaulting you.

But I do think that in situations where bodily harm is the goal of the attack (from kidnapping/abduction to physical assault), this alarm could be valuable.  It’s far easier and quicker for an attacker to get an object you’re carrying than to rape or abduct you, and an attacker who wants you can’t get you if they simply run away.  They can’t run away with you.  Because more time is generally needed for rape or abduction, a loud alarm that draws attention may dissuade an attacker from continuing, increasing the chance that he gets exposed or caught.  So my initial thoughts are that this alarm would be ideal when bodily harm is threatened (or even beginning) and bringing attention to the attacker may cause him to flee.

I don’t see this as an effective tool for men in most situations.  Men are far less likely to be abducted or raped, and “fights” that men get into (which are almost always avoidable) often happen in crowded places anyway, where attention is already on the participants.

However, I do think it could be an effective self defense tool for women (particularly those who don’t want to carry pepper spray) and children.  Giving children pepper spray probably isn’t a good idea, but this alarm is something they could carry 24/7, anywhere.  It’s something they could easily learn to use, and something they wouldn’t have to feel bad about using even if they used it in error.  Unlike with pepper spray and other weapons, using a personal alarm cannot injure someone mistaken for an attacker.  There is zero downside to giving this alarm to a child, and considering it could save the child’s life, it’s hard for me to imagine why a child shouldn’t have one.  They’re also very inexpensive.

The key with any self defense tool is understanding when it should be used, and when it shouldn’t.  No weapon works in all situations.  No weapon is perfect.  For adults willing to put in the training time, I highly recommend learning to use and defend against weapons.  Weapons use dramatically increases your odds, and the training can be great fun.  But especially for women who are unwilling to learn to use a weapon (or unarmed self defense for that matter), and most definitely for children, I think this alarm could be an excellent self defense tool.

Let me know what you think in the comments…

Want to get FREE self defense material and tips?
Just enter your name and email below:
September 22, 2014| Categories: Awareness, On the Web, Product Reviews, Strategy & Principles | 5 Comments »